May 4, 2021 - Friends of the Chessie Trail has just completed a four-year project to construct more than 1200 feet of new trail and a parking area on the Buena Vista end of the trail. Thanks to this work and work by the City of Buena Vista, trail users can now proceed unimpeded from East Lexington all the way to Buena Vista, the River Walk trail, and beyond.

Most people are not aware that the Chessie Nature Trail property, owned by Virginia Military Institute, extends all the way to the former Bontex property in Buena Vista. For years the Buena Vista trailhead was located where the trail first meets Stuartsburg Road, almost half a mile from the actual end of the trail property. Parking was limited to 2 or 3 unofficial spots on the shoulder of the road and thus usage of the Buena Vista end of the trail was limited.

At some point decades ago, the Department of Game and Inland Fisheries developed a boat launch and small parking area between the trailhead and Rt. 60. The DGIF parking area was sometimes utilized by Chessie Trail users, despite signs threatening arrest for those who used the site except to fish or launch boats. From the boat launch, trail users had the choice of walking on Stuartsburg Road, or bushwhacking their way along the river on a path that was often completely overgrown or under water.

Old timers may remember that the railroad used to be where Stuartsburg Road is currently located and the road was lower down, between the railroad and the river. Remains of the old guardrail can still be seen along this stretch, some of it permanently underwater.
In the early 1980s as part of the new Robey Bridge construction project, Chessie Trail property was ceded to VDOT for construction of a new Stuartsburg Road on the bed of the old railway.  A small strip of land between the new road and the river was retained by the VMI Foundation (then owners of the trail). VDOT construction drawings show a ten foot wide trail along the river and a pedestrian ramp going up underneath the new bridge  to Rt. 60. The pedestrian ramp was built, but the trail along the river was to remain only lines on a piece of paper for the next four decades.

In 2017 both FOCT and the City of Buena Vista began working towards establishing a connection between the Chessie Trail and Buena Vista’s River Walk trail. FOCT began work to make a more passable trail along the river and to establish a parking area adjacent to the boat launch. Meanwhile, Buena Vista was pursuing grants for a sidewalk along Rt. 60 from Burger King to the Robey Bridge, and for restoration of the pedestrian ramp under the bridge.

Last month, the FOCT board of directors approved purchase of more than a million pounds of fill clay and crushed stone that would be needed to complete work on the new section of the trail. Work moved forward quickly as 285 tons of clay fill was placed, covered with 219 tons of crushed stone, and graded.
​
All told FOCT spent more than $6000 on the trail and parking area project, funds which were donated by its members and proceeds from its annual race and race sponsors. In addition, a substantial donation of crushed stone was made by Charles Barger and Son. One hundred percent of the labor on the project was donated by FOCT volunteers.​ 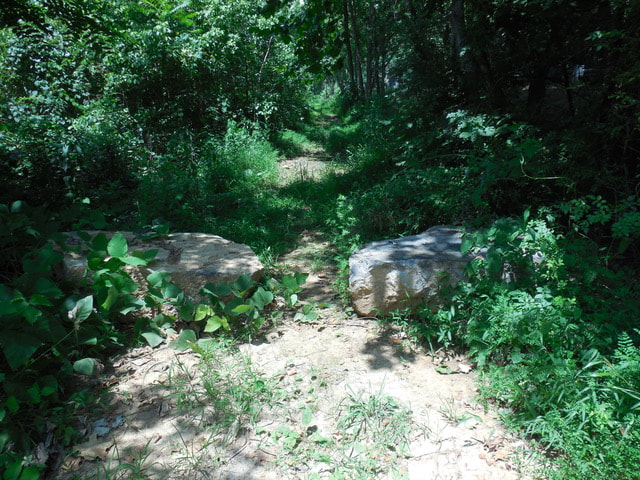 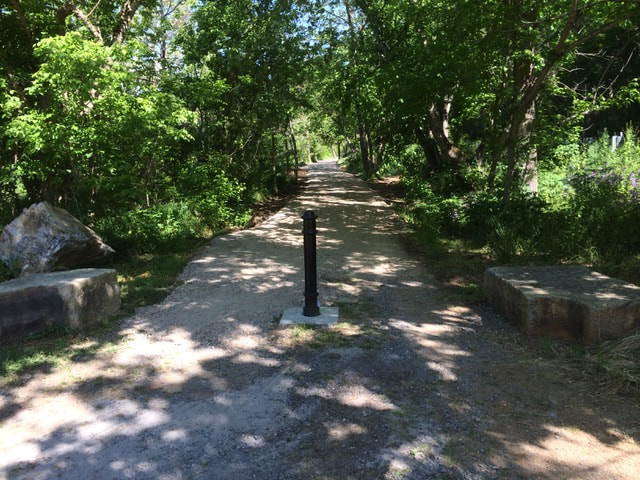 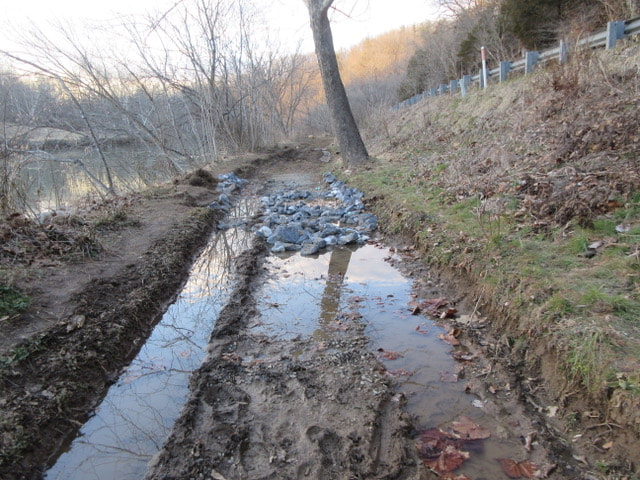 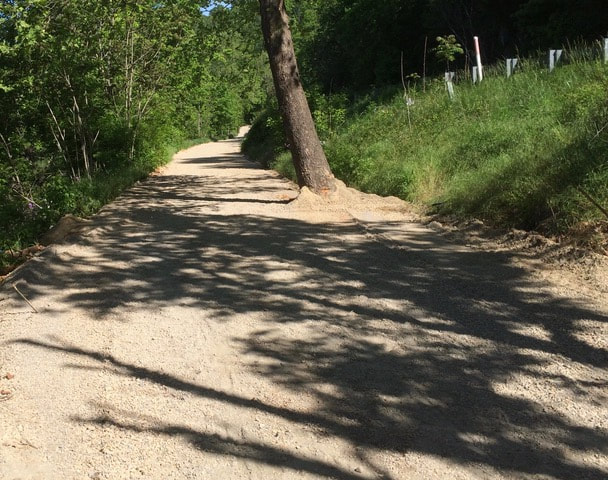 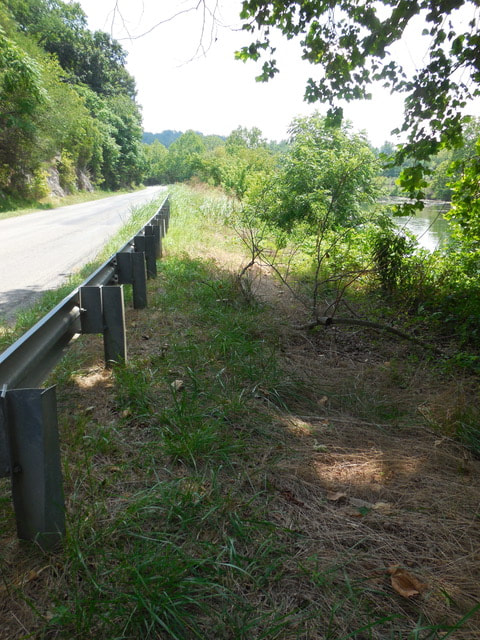 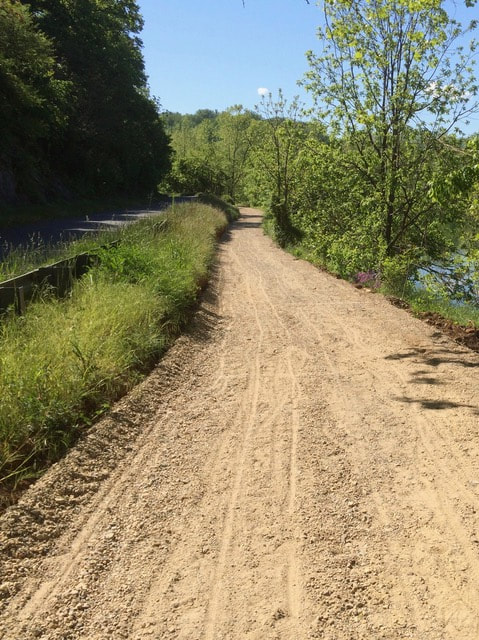 Summer 2018 - Members of the FOCT recently gathered for the formal dedication of a kiosk, which had been years in the works. The kiosk is located near Mill Creek, on the Lexington end of the Chessie Nature Trail. In the few months that the kiosk has been up, it has become a landmark and popular meeting point for trail users and events. A map of the trail with information on some of the historic features is posted on one side of the kiosk, as well as a map of regional trails and guidance for trail etiquette. On the other side of the kiosk is a bulletin-board for trail-related information, as well as a lost and found basket.

The kiosk was designed by Eric Sheffield and fabricated pro-bono in the workshop of Eric Sheffield & Co. The installation, painting, and roofing of the kiosk was done entirely by FOCT volunteers, utilizing heavy construction machinery and scaffolding donated by Robert L. Faulkner & Son Masonry. Funding for the kiosk came from donations by the FOCT membership and funds raised from the annual Chessie Trail Marathon, Half Marathon, & 5K.

Eventually, the group would also like to install a kiosk at the Buena Vista end of the trail.

Fall 2018 - In November, the FOCT maintenance committee replaced the gate across the Maury from Ben Salem dam. This was the last of the gates we needed to replace to make the trail completely pedestrian- and bike-friendly, extending from behind the Pure Oil Station on Old Buena Vista Road near Lexington to the Buena Vista end. We're still working on making the trail completely accessible all the way to Jordan's Point.
Website created by Laurel Worth Sheffield. © Friends of the Chessie Trail